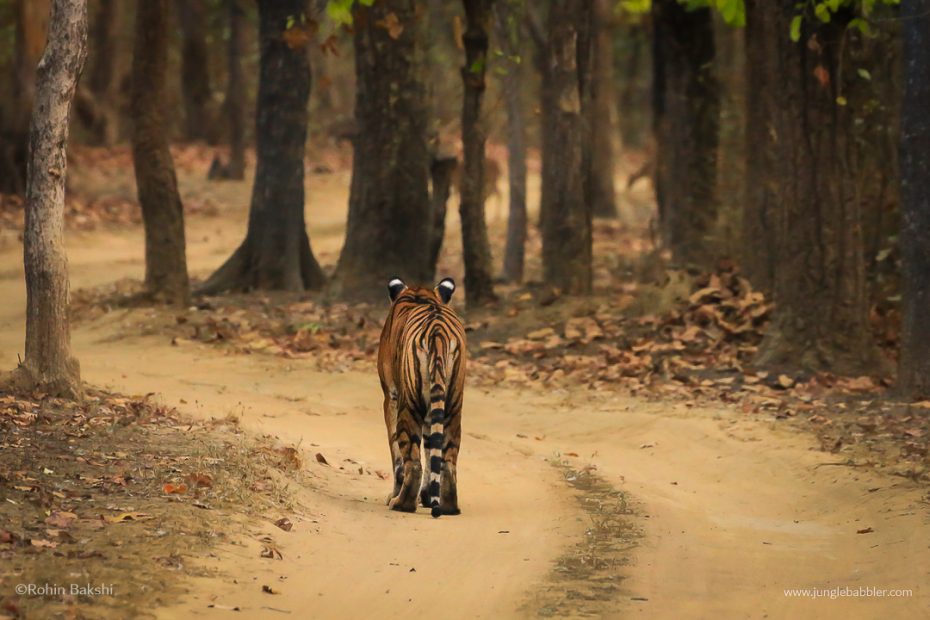 Our first tiger in the wild – An experience that still gives us goosebumps!

Today is International Tiger Day, and it is perhaps a good day to appreciate India’s efforts in Tiger conservation. India has come a long way in saving its tigers, bringing up their population from the lowest recorded number of fewer than 1500 individuals back in 2006, to close to 3000 individuals in the latest recorded census. Having said that, there is still a long way to go, and India cannot take its foot off the peddle now. Back in the 2000s, spotting a tiger in the wild must have been difficult, probably because there were anyway so few of them left, and also because there was little awareness, and only a handful of master trackers. There have been positive changes on all these fronts, and I feel that it’s all these beautiful changes that came together on that fine summer morning in 2017 when Mansi and I saw our first tiger in the wild.

On the pleasant morning of April 19th, we sat in a green gypsy queueing outside the Mukki gate of Kanha National Park, the forest officials checking our IDs and matching them with our safari passes. This was our first visit to Kanha, and our excitement was peaking way before it should have.

I had been told, and had observed this first hand- you go into the jungles with little expectations. Enjoy the deer and the birds and the beautiful forests. Anything more is sheer luck. But that morning felt different, something more was beckoning us from the other side of that gate.

Kanha National Park (or Kanha Tiger Reserve) is one of the biggest parks of central India, covering an area of over 1067 km2, located in the state of Madya Pradesh. Home to thousands of species of flora and fauna, Kanha is known for its healthy population of tigers, and is also home to swamp deer (ground Barasingha)- a species Kanha and the MP Forest department can boast of bringing back from the brink of extinction. Divided into 4 core zones (Kanha, Kisli, Mukki and Sarhi), one can easily book safari passes from the MP Forest Department website, as long as you do it well in advance.

(Personal Opinion– Of all the parks in India, self-booking safari passes is by far the smoothest and most seamless for the MP national parks)

It was 5.29 am and we would enter the park in another minute. I gave a quick last look to my camera and lens settings (I had rented a ‘fancy’ lens back then, and I was super anxious as to how I’d do if we witnessed some wildlife action!), and in we went; would Kanha be a gracious host?

Going inside, our spirited guide Sarita gave us an overview of the jungle- its area, how much of it is accessible to the tourists, definition of its buffer zones, and its famous resident tigers, while we soaked in the beauty of the low-lying morning mist under the tall, century-old sal trees. The jungle scents filled our senses with the serenity you read about in poems, and the chirping birds announced the break of dawn, waking up the jungle in all its glory. As we moved deeper and deeper into the forest, traveling along its broken winding paths, in no time, we entered a tiger’s territory- tiger tracking had begun.

Standing at a crossroads near Bagh Puliya in Minkur area, our driver turned off the gypsy’s ignition for what we now know is to listen for any alarm calls, which is integral to tiger tracking. A few minutes passed in silence. More gypsies gathered in the area, and the guides stood up on their seats to focus and listen to the tell-tales of the jungle.

Then it happened- the silence was broken by a shrill sound, the kind you make when you stub your toe into a table’s leg, only much louder. It was an alarm call of a spotted deer; a predator was lurking close by! The ensuing ‘planned’ commotion is hard to describe, but suddenly the ignitions were on and the cars started to spread along the four branching roads. It may have appeared haphazard at first, but everyone knew what they were doing. They were spreading out so that wherever the predator walks out from, there is someone to spot it and alert the other vehicles. There was beauty and unsaid planning in that chaos.

Sarita decided to stay in the same place where we had stopped, keeping one eye on the meadows in front of us, and the other on the vehicles around us. Some more minutes passed. Mansi and I did not understand much of what was happening then, but we did our best to support Sarita in the spotting process, scanning the area with her.

Suddenly, our driver jumped out of his seat and yelled in hushed voices- “Tiger! Tiger!!”, pointing into the meadows. I hadn’t seen it yet, but I picked up my camera and started scanning the area through its viewfinder, using it like binoculars. And then, I saw it, a few stripes floating above the grass. Instinctively, I pressed the shutter- I wanted to have an image as proof that I too had now seen a tiger in the wild! It wasn’t much, but it was my first photo of a wild tiger, and it will always be special. Luckily for us, that wasn’t the last of us seeing her, it got much better.

Instead of disappearing into the meadows, the tiger decided to turn left, and walk out straight to the main road! It was a 9-year-old female, fondly called ‘Chhoti Mada’ (T-31), named after her mother, ‘Badi Mada’. It is probably not the best way to describe a tiger, and if Chhoti Mada ever found it out, she might literally decide to turn into a man-eater just to eat me alive, but Chhoti Mada is probably the cutest-tiger-ever! If I didn’t know she was named after her mother, I would have thought they named her ‘chhoti’ for how adorable she is, you almost want to get down from the vehicle and play ball with her (don’t EVER do that!). We have now seen a handful of tigers in the wild, but our perception about her remains the same- that beautiful face, those dark brown eyes, and that perfect cat-walk; Chhoti Mada is GORGEOUS.

I kept clicking her pictures as she walked closer and closer to our vehicle up to a point when she was so close that she wouldn’t fit in my camera frame (I was at the short end of a 100-400mm lens). Mansi pulled me in a bit, probably because some part of me was outside the car boundary, and as I removed the camera from the front of my eyes, I saw Chhoti Mada not more than a couple of arm-lengths away! I also realized that this was the first time I saw her-saw her, because up until that point, I had just seen her through the viewfinder of my camera. I stole a quick glance at Mansi- we both smiled, still grappling with what was happening, and I turned back towards Chhoti Mada, continuing clicking away merrily.

The next fifteen or twenty minutes were pure bliss. She walked down the winding roads as our cars followed suit (road hi road is what it’s called), sniffing trees, marking her territory, showing a flehmen response to gather scent of other predators, and watching deer pass by minding their own business, while she minded her own. She did not seem to care about the 10-15 vehicles tracking her every move, nonchalantly walking until she disappeared into the woods again.

It seemed like it was just another day for her, but little did she know how she changed the lives of two people, sitting in awe in gypsy no 216, for life 🙂

All hail these fearless tigresses and women guides venturing into male-dominated territories and paving new paths in the jungles of India! 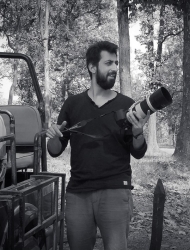 Latest posts by Rohin (see all)

1 thought on “Our first tiger in the wild – An experience that still gives us goosebumps!”

previousA battle to claim the throne – will there be a new queen of Ranthambore?
nextHow to tackle “Tiger Boredom” on a hot summer afternoon