How a shot of adrenaline changed my life!

This is a guest post by Mihir Mahajan, jungle safari mentor and big cat tracker from Beyond Wild.

It was an eerily quiet and insanely frigid December morning in the long and somber winter of 2008. Thick and impenetrable mist hung low over the woods of Nagzira, creating an invisible barrier between us and the enchanting jungle around, which was just waking up to a new day. The sun must have risen by the time we woke up and took in the breathtaking yet frightening spectacle of the thick winter’s mist, for we could see feeble rays of a light orange color trying to unsuccessfully break through the mist. The mist won and heavy darkness descended once again upon the land.

They say, when one of your senses is compromised, the other ones take over. Even as the fog stayed put, the jungle awakened in all its glory, one bird song, one langur hooping, one chital rutting, one cicada crying at a time. It is quite a special experience to hear the jungle as it whispers ancient wisdom into your ears. I felt blessed, almost transcended into a utopian world where sight did not exist, and yet, magic did.

A few minutes later, as the sun finally gained an upper hand over the gritty fog, we walked the hundred-odd paces to the Nagzira lake, which was right next to the old and dilapidated forest rest house that we were staying in. The presence of abundant water and a towering hill to its north must have been the major reason in the fog being so vicious, unmoving, and powerful. Shivering and shaking but thankful of the peeping sun and the slight warmth it provided us with, we reached the lake and to our astonishment, there was a sambhar doe swimming frantically in the chilly water. This was extremely surprising even to us novice wildlifers, but our experienced forest guide had a thoughtful, somewhat perplexed expression on his countenance! No deer in its right mind would jump and later swim in such cold waters. He could sense panic and trepidation in the deer’s activities and what might the reason be, we wondered!

Instantaneously, the four of us exchanged knowing looks and sprinted back to our rest house, where sat our decrepit gypsy, literally a relic from a bygone era, maybe the British Raj!

If you are still with me, dear reader, and before I proceed with the very interesting account of what happened when our disgruntled gypsy finally sputtered to a start on that bleak and bitter morning, I wish to mention to you three very important and decisive pieces of information that I gathered that morning, and which have helped me in my eventual career as a wildlife guide and tiger tracker. Firstly, never ignore a distressed or distraught sambhar. Those hardy beasts of the dense Indian woods never bluff. Never! Secondly, having an intimate knowledge of the jungle paths, waterholes, ‘pundundees’ (a Hindi word for a foot trail commonly used by humans and animals in the Indian jungles), and the preferred movement paths of individual and resident tigers is of paramount importance. I noticed the guide’s eyes twinkled within an instant of seeing the strange activity of the sambhar and his mind started calculating, for tracking tigers is a great art involving an intricate process which is made up of instinct, knowledge, experience and extremely sharp senses (some people collectively refer to these as ‘luck’!). He knew, almost at the subconscious level, the exact place from where the sambhar had jumped into the water, the complex network of roads and jungle bylanes cutting across that area, the habits of the resident tigress living there and most importantly, an impeccable understanding and anticipation of the tiger’s movements, including the paths she’d follow in the next few minutes. A curious teenager, I was learning so much from that simple forest guide for whom tracking the tigress was the sole mission of his life at that moment. Nothing else mattered, he was one with the ancient skill of woodcraft, the art of tracking. Thirdly, time is crucial in the jungle. Even a second’s delay can be a golden opportunity wasted. As we sat in the gypsy, my friend who, inexplicably, was wearing just one layer of a moderately warm sweatshirt, exclaimed that he’d rush inside and grab his coat. Flabbergasted, the guide disallowed him from doing so and thus saved a valuable two minutes, although my friend who had a sour expression on his face for the next many minutes might disagree about the value of those two ‘short and irrelevant’ minutes!

As we made our excited and anxious way to the ‘spot’ where our guide thought the sambhar had escaped from the clutches of the attacker and jumped into the water, a sense of uneasiness crept upon me. The birds had suddenly gone quiet, the usually excitable and over-zealous langoors sat motionless on the high branches and far away in the thicket, a herd of visibly startled chital stood their ground, all of them staring beyond the dense jungle of tendu (Indian Ebony Tree) and onto the meadows beyond. Jittery and nervous, the chital knew something that we did not. Sensing the movement of a predator by the strange happenings around us, our guide ushered the driver to move, gently, toward the meadows where the chital and now the langoor on the topmost branches looked. As our gypsy rumbled on the old and dewy forest path, I heard the most intense calls I had ever witnessed in a forest. Many chital, two sambhar and a host of langoors from near the meadows raised a pandemonium, running helter-skelter at having seen their greatest nemesis, the most perfect killing machine there is!

Confident of having tracked the subject of our endeavor that morning, we drove as fast as our ramshackle gypsy could carry us, which was indeed an adventure as our coat-less friend from a few minutes before was almost thrown off the gypsy, we reached the meadows and there she was; a sight I cannot ever forget as long as I live! The mist had now completely evanesced and the purest of the pure golden lights filtered on the dew-laden coat of a young tigress, probably three years old.

I could see her lithe body dance through the meadows, the blades of grass making a beautiful sound as she passed. She was walking with intent, paying the least attention to the hundreds of bewildered and shocked herbivores who had been unceremoniously disturbed from their tranquil grazing on a fine winter’s morning! Slouching slightly in her gait, she suddenly disappeared into the lantana thicket next to the meadow, a dense patch of shrubbery that overlooked the Nagzira lake which the sambhar doe still paddled in, although exhaustion and fright had reduced her earlier vigor to a fragile remnant. A few intensely quiet moments followed, and the tigress still lay hidden in the dense undergrowth.

Dear reader, these tantalizing moments in the jungle, when you are unsure about what is about to happen, are the ones that stay with you forever. As we sat on the edge of our seats (or whatever remained of them!) in the gypsy, we could see the tigresses’ tail moving ever so slightly, while her entire body remained taut and stretched. She had seen something, probably a potential prey. And then it happened! A swift movement, a gigantic leap, a momentary flash of orange brilliance, and a blood-curdling shriek. Silence followed soon thereafter. The tigress had spotted the disoriented fawn of the sambhar doe who had jumped in the water (the mother and child had gotten separated then) and in one incredible leap which must have measured at least 5 meters, pounced upon and killed the young deer. What force must have struck the young fawn only Nature knows, but we were shaking uncontrollably with excitement and emotion. In a thousand safaris, you expect to witness something of this far-fetched dramatic value probably once! With pounding hearts and dizzy heads, we gawked in disbelief as the tigress dragged the deceased fawn across the jungle track and eventually out of our sight.

The heart still thundered and the body trembled, but we had to return to our rest house. The steaming hot cup of tea and the delicious poha had never tasted better, as we dug into a much-needed breakfast. The cold had disappeared, at least from our bodies, such was the intense drama that we witnessed!

The next night as we returned to civilization, and many nights thereafter, on chilly winter nights and sultry summer evenings, I have narrated this tale of epic proportions to many an audience, young and old, on countless Beyond Wild expeditions. A tale that transformed me, an incident that told me where I truly belonged. Twelve glorious years and 700 unique tigers later, as the inner calling continues to express itself with love and passion of a saga that shall be lifelong, I fondly recount the shot of adrenaline that changed my life!

*The cover photo is just a representative image by Mihir Mahajan from Bandhavgarh National Park. 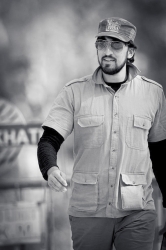 Mihir Mahajan
Some people call him ‘One of the best tiger storytellers around’, while others sing praises about his incredible work efficiency, promptness, discipline and perfection in all he does! Yes, he is indeed the 4 o’clock safari wake-up call personified. No one else that we know of can match his passion, energy, and tiger tracking skills. Beyond Wild’s engine, Mihir leads tours for almost 300 days a year and swears by the fact that it is in the great wilds that he finds his true happiness. He is someone you won’t forget easily, for he will lovingly charm his way, making you a nature (and Big Cat) addict for eternity.

2 thoughts on “How a shot of adrenaline changed my life!”